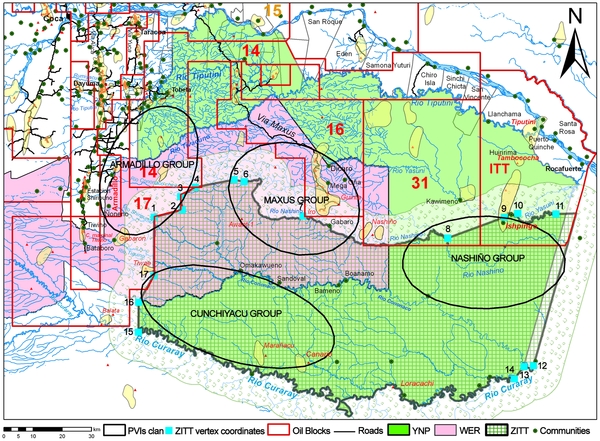 The overlapping systems of territorial complexity in and around the Yasuní Biosphere Reserve: the Zona Intangible (ZITT) is geographically adjoined with productive oil concessions area at the north-west side; on the contrary the north-east sector overlaps both with oil blocks No. 31 (operated by the Petroamazonas national company) and that ITT block (Ishipingo-Tiputini-Tambococha block, Secreteria de Hidrocarburos of Ecuador). The spatial distribution of the Tagaeri Taromenane clans is partially outside the ZITT perimeter in the cases of the Nashiño and the Maxus groups; the Armadillo group is completely outside the ZITT boundary overlapping oil blocks No. 14 and No. 17. Their home range overlaps several titled and untitled land of mestizo (colonos) farmers and non-autochthonous indigenous settlements in the Dayuma and Ines Arango districts, implicating a sensible proximity with roads system related to the Via Auca main axis. The presence of the Armadillo group in this area is also confirmed by recent violent contacts between the Hormiguero oil platform and the Armadillo oil field.